"But all things must be done properly and in an orderly manner."
1 Corinthians 14:40

In July 2016, at the Fiftieth General Conference of the African Methodist Episcopal Zion Church, Staccato Powell was elected the One Hundred and Second Bishop in the line of succession in the African Methodist Episcopal Zion Church (AMEZ). As the prefect of his episcopal class, Powell was the first Bishop elected out of Eastern North Carolina since the venerable James Walker Hood in 1872.

As the Presiding Prelate of the Western Episcopal District, Bishop Powell oversees churches in the Alaska, California, Colorado, Oregon-Washington and Southwest Rocky Mountain Conferences. Having more than 40 years of experience in evangelism, ecumenism, and ecclesial growth, Bishop Staccato Powell, undeniably understands the desires and needs of the African Methodist Episcopal Zion Church.

Bishop Powell hails from Hallsboro, North Carolina where he accepted the call to ministry at age 16. Soon after, at age 18, he received his first assignment to pastor. Bishop pastored in several churches in his native North Carolina with his last pastorate at Grace AME Zion in Raleigh. Bishop Powell also served as pastor in a congregation in St. Louis, MO and became the fourth pastor in succession to be elevated to Episcopacy.

Bishop Powell’s ecumenical reach and global evangelism are extensive. As an ecumenist, he served as Vice Chair of the General Assembly Committee on Ecumenical Relations for the Presbyterian Church (USA) and as a former board member of the National Board of the Interfaith Alliance, the Balm in Gilead Religious Advisory Board, the National Conference of Community and Justice, the World Methodist Council and the former United States Conference of the World Council of Churches. He also served as Chair and Coordinator of the “Great Gathering,” a collaborative meeting of the historic African American Methodist communions, African Methodist Episcopal, African Methodist Episcopal Zion, and Christian Methodist Episcopal Churches.

Bishop Powell is currently serving an unprecedented second term on the National Council of Churches Central Committee. He is also a board members of Creation Justice Ministries, and ecoAmerica Blessed Tomorrow Leadership Circle. He is a founding convener of Black Methodist United, an assembly of senior bishops who are committed to addressing issues of social injustice in America, supporting job creation and training programs in the African American community.

Bishop Powell holds a Bachelor of Arts degree in political science from the University of North Carolina, Charlotte; a Master of Divinity degree from Duke University; and Doctorate of Jurisprudence degree from North Carolina Central University. He also served as Grand Chaplain for the Omega Psi Phi Fraternity, Inc.

As Missionary Supervisor, Nicole Powell provides leadership for Christian mission and related ministry work locally and aboard, including her brainchild, the mental health initiative, which is one of four major priorities of the Western Episcopal District. She exemplifies the principles of Christian living guiding the women of the Western Episcopal District in their effort to win the world for Christ and promoting participatory evangelism experiences.
A graduate of Spelman College where she earned a Bachelor of Arts degree in English, with minors in Psychology and Religious Studies and the University of Pennsylvania where she earned a Master of Social Work with a specialty in Child Welfare and Well Being, Nicole served as President of the University of Pennsylvania’s Association of Black Social Workers and as the 2nd Vice President for the National Association of Black Social Workers. She is a member of the Ecumenical Education Formation (EEF) Commission for the World Council of Churches as a representative for the African Methodist Episcopal Zion Church.

Mary Margaret Tisdale was born in Welch, West Virginia and raised in Little Rock, South Carolina. Mary supports the work of the Bishop and the ministry and operations of Western Episcopal District by assisting with overall management of the business functions, scheduling for the Bishop and Episcopal events, organizing annual conferences, ensuring pastors are present for Clergy meetings, detailing agendas and programs necessary for the work of the Episcopal District.

Most important to her ministry is her significant responsibilities for representing Bishop Staccato Powell as he serves local, district, conference, regional, national and international communities of believers. She resides in Granite Bay, California and takes pleasure in doing the work of the church. Mary delights in having opportunities to uplift and encourage people that she encounters in her daily workings and finds joy in assisting Bishop Powell as he takes the Western Episcopal District in a new direction in ministry. 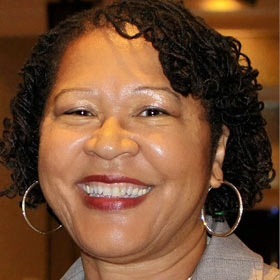 Sheila Quintana, an Oakland native and a product of the Oakland Unified School District serves as the Chief Operating Officer of the Western Episcopal District. She supports the general management and oversight of the Western Episcopal District’s business functions and assists with its financial management to ensure that the operational, business and ministry efficiency and goals are met.

Dr. Quintana serves the African Methodist Episcopal Zion (AMEZ) Church on the Connectional Trustee Board, the Codification Commission, which oversees The 2016 Book of Discipline (the Constitution and Laws of the AMEZ Church), the Quadrennial Site Committee, and the Compilations Committee. During the 50th Session of the General Conference in 2016, she served as the Chair of the Secretariat.

In the Western Episcopal District and the California Annual Conference, she serves a District and Conference Trustee. In her home church, Kyles Temple AME Zion in Vallejo, CA, she serves as the Chair of the Trustee Board, Lay Council Membership Chair, and as a consecrated Deaconess.

From 1998 to 2004, she was elected the President of the Oakland Education Association (OEA) in Oakland, CA, responsible for negotiating and the implementation of salary and benefit contracts, which impacted the 4000 teacher members, the 54,000 students, and the 106 schools in the Oakland Unified School District. She managed several employees at OEA and a $3 million per year budget. She served as the first African American Chair of Negotiations for the California Teachers Association (CTA) Negotiations Committee, which represented 330,000 teacher members and 1000 California school districts contracts.

Dr. Quintana attended Occidental College in Los Angeles, CA where she received her B.A. Degree and Life Time Teaching Credential. She received her Administrative Credential in 2005 and her Masters in Educational Leadership from California State University, East Bay in 2007. In 2015, she received a joint doctorate in Educational Leadership with University of California, Davis and Sonoma State University. She served as an active member of Alpha Nu Omega, Alpha Kappa Alpha, Inc., in Oakland, CA for many years until she transferred to Kappa Beta Omega, Alpha Kappa Alpha, Inc., in 2015. In 2017, she was inducted in the Solano County Chapter of Links, Inc., in Vallejo, CA. 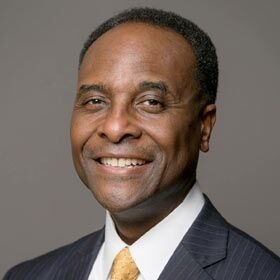 Charles Blackmon serves as the legal counsel for the Western Episcopal District. He focuses his private legal practice primarily on non-profit, business, and entertainment matters.

Prior to starting C.K. Blackmon Associates in September 2018, Mr. Blackmon was a member of Tuggle Duggins, PA and Gray Johnson & Blackmon, LLP as well as a founding partner with the law offices of Whitfield & Blackmon, LLP in Greensboro handling a variety of practice areas. He was an associate attorney with the firm of Dessen Moses & Sheinoff in Philadelphia, Pennsylvania before then, concentrating in labor and employment law.

Mario Powell, a native of Hallsboro, North Carolina serves is the founder of the KIDZ4Christ Early Learning Centers, Incorporated, the model “We Learn by Doing” has been the catalysis for success across the Western Episcopal District.

Mario received a Bachelor of Science Degree in Elementary Education with a Minor in English from North Carolina Agricultural and Technical State University-1995.  He taught both fourth and fifth grades within the Richmond City Public Schools District in the Commonwealth of Virginia and has worked with various education reform models including the Council for Basic Education-District of Columbia.  A resident of Columbia, Maryland, Mario and his wife Trina Powell enjoy educating youth in Baltimore City, Maryland. 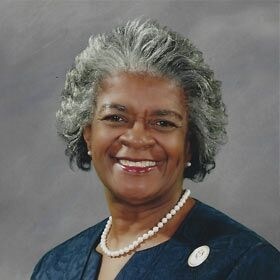 Sandra K. Davis, a native of New Orleans Louisiana, Sandra was raised in Sacramento, California and serves as the President of the Board of Trustees for the AME Zion Western Episcopal District, serves as Director of Christian Education for the Western Episcopal District. In this capacity, she is responsible for coordinating special projects, guides the organization in public policy and administration, interacts with governmental agencies, analyses data driven ministries and other metrics.

County government provided Sandra an opportunity to serve in diverse roles. Her basic training as a registered nurse launched a formidable career in the healthcare industry. She managed and supervised employees, lead continuous performance improvement activities in the industry, and became skilled in writing departmental policies and procedures. In addition, she led multiple regulatory review efforts, diverse interdepartmental relations, coordinated inter-collegial projects while fostering dynamic community relations. As a healthcare executive she participated in committees, boards and efforts that improved the quality of life of those she served.

When teaching, she enjoys teaching Sunday School, evidence-based practice, research and statistics that healthcare providers can understand. She is skilled in budget preparation, monitoring and evaluation. Dr. Davis also served as President of the largest healthcare executive organization in the California. 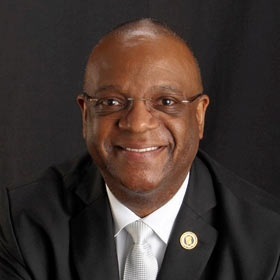 Dr. Thomas completed her bachelor’s degree in psychology at Fresno Pacific University. She went on to Fuller Theological Seminary to earn her Masters in Psychology, Masters in Theology and Ministry, and Doctor of Psychology in Clinical Psychology. Her areas of research and expertise include substance abuse; poverty; multicultural issues; spirituality and health; program planning, development and evaluation; and integrated medical and behavioral health care. Dr. Thomas and her team have organized MHAI programming and resource distribution for designated areas concerning mental health. She is also active in organizing Mental Health Resource Rooms in local churches in the Western Episcopal District with the goal of reaching underserved and marginalized communities.

Dr. Thomas is also the founder and owner of Allay Psychological Services in Fresno, CA, which provides affordable mental health services to individuals and families of diverse backgrounds. Apart from her clinical roles, Dr. Thomas is an ardent musician. She serves as Minister of Music at her local church where her father served as pastor for nearly a decade.